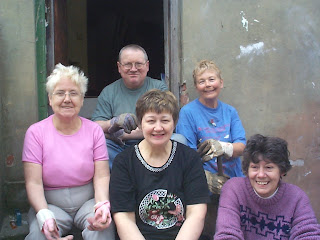 
I meet Susan Hardy and we get married on August 21st 1988 Although we met on an Open University Social Sciences degree foundation course, it's really our mutual love of animals which brings us close.

Susan at the time was active in the anti-vivisection movement, which she still supports, and had been for some while. She got me to go along to some meetings and a couple of marches, though the movement seemed to be declining in Sunderland at least. I had and still have some reservations about its demand for a total ban of animal vivisection, though I would like to see a situation where it was completely unnecessary.

About a year after buying our first house we get our first cat together. Lucy is a stray black and white which wanted to live with friends of Susan's. They advertised it but no-one claimed it, their cat hated it, we went round and she sat on my knee the whole time we were there. When we got her home, she had a wander round, used the cat litter, ate something, then jumped on my lap and sprawled across my left knee, paws on either side of my leg. A couple of years later we got another cat whom I called BB after BB King (whom I'd recently been to see at the Newcastle Arena with Susan's brother), being that he was short, black and with a pot belly. A little while Bonnie, a psycho long-haired tortoiseshell, jumped in front of Susan while she was talking to a neighbour in the street. Susan picked her up ,ran in the house, gave her to me and went to visit her mother. Bonnie was in heat, we had her spayed (the vet reckoned she was about 3 years old) and she's still with us albeit a little bit doddery. Lucy had a stroke which left her blind and partially paralysed so we had her put to sleep. BB was hit by a car in our street and, we think, died almost instantly.

In the late 90's we started helping a lady called Wendy who'd set up her own rescue called Wendy's Ark. A support group had formed around her and Susan became active in that. Wendy, being shall we say, difficult, ended up splitting from the group which became the north side of Sunderland's animal rescue Pawz For Thought. Susan became fed up with Pawz for Thought because it became clear that only one person in the organisation mattered and everything had to be done her way.

About the same time Susan and I met Andrea, an animal-lover who was the shop manager of the local branch of Oxfam in Grangetown where we live. Oxfam was closing the shop down and Andrea was interested in setting up another charity shop. It seemed a match made in heaven. We soon found -found is not the right word- we walked along the street and stopped at boarded-up premises about a hundred yards away from the bottom of the street where we live.

The owner showed us round. It was a total mess. In the larger of the upstairs room, there were gaps in the ceiling and in the roof above. The floor was covered in a layer of pigeon shit and dead pigeons and the stench was appalling.

However as the rent was so cheap we took it. The owner had the roof repaired and cleaned up the rooms making it at least habitable. We then set about renovating it which involved redecorating, cleaning, fitting shelves, and so on. Even with the help of a number of volunteers, it still took months. I suggested the name Animal Crackers because it indicated what we were about, it was also the name of a Marx Brothers movie and a Shirley Temple song, which I'd like to forget but can't, so it had added nuances. Later on and for legal reasons we had to change the name to Animal Krackers.

As the shop took shape so did our ideas about what we wanted to do with the funds we raised. Although the spur to open a charity shop was to raise funds for Wendy's Ark, we never intended to limit ourselves to just funding Wendy. We hoped to be able help other local animal rescue organisations. A few months later, and like most people it seems who have much to do with her over long periods, we had a falling out with Wendy so we concentrated helping other local rescues and building funds to go towards establishing a permanent financially secure animal rescue for the City of Sunderland.

What we weren't going to be, until then, was an animal rescue.

To be honest, my interest had tailed off somewhat because the shop didn't become what I'd hoped. My intention had been, and I was more than willing to do all the work, was to have the shop become a pet information centre as well as our prime means of raising funds. But no-one was interested or wanted to give it much space. Making as much money as possible was the important thing. And after spending my working week involved with the public the last thing I wanted to do was go behind the counter of a charity shop or sort out stuff behind the scenes.

While this was going on we acquired Lily, a five week old grey kitten, and our fourth cat.

However, word got around about us and people started coming to us with lost animals, mainly cats and dogs, and we had to develop procedures to deal with this when the local rescues were full. Part of this involved liaising with Carol the cat rescuer who worked under the aegis of Pawz for Thought. With me being so keen on cats, I happily took this on. And then Carol fell out with Pawz for Thought and we took her under our wing, paying for vets bills and collecting (we had dump bins in several local food stores) and buying food.

On a visit to Carol's, Susan fell in love with the runt of the litter, a tiny long haired tabby who is now called Tiger and is the biggest cat we have.

Max, a needy six month old black and white cat was brought to the shop only a week or so after BB's death. We were just going to foster him for a few days and then take him to Carol's but he never left. A few months after that while Susan was away for a week's holiday with her brother and his family I fell in love with a little ginger kitten Carol had taken in. Several months after that Susan was at the doctor's when she was told of a kitten in the scaffolding outside. We advertised in the local newspaper but no-one claimed her so she also stayed. A couple of years later and while at Carol's a large black and white cat literally jumped into Susan's arms and she didn't put him down.

In the eight years since we first took on the shop we've developed from a virtually unknown support group to a very well known and highly regarded local rescue. The Sunderland Echo has featured us on its pages a few times a year -the most recent piece late last year was a double-page spread about cats with a quite decent photo of me on it. We temporarily house dogs at Ferryfarm Kennels in Sunderland and at StrayAid at Coxhoe (see earlier posts) and this works very well. I'm busy several times a week either picking up cats to take to Carol's or taking them to the vets, collecting food or sometimes driving the van for dogs. We always spend well over a thousand pounds a month on vets bills and it would be more if it wasn't for the national charity Cats Protection giving us neutering vouchers worth £30.00.

Sometimes we have to make the hard decision about whether or not we can save an animal or if it should be put to sleep. I hate that and have to convince myself I've done the right thing. My prime concern is that I do not let an animal suffer and if that means putting it to sleep then that is what I have done.

This is my blog and you may get the impression that I do a huge amount. If you have, then that's wrong. Susan and Andrea do far far more than me every day. I do what I enjoy doing and that is running around helping cats and, where required dogs too. I love dogs, I just love cats more.

Obviously the cat rescue story continues in all the proceeding blog posts. The dog side of things continues more or less unchanged. The major change was our opening of the Cat-Rehoming Centre at Ferry Farm Boarding kennels (again fully detailed later in this blog). Volunteers have come and gone and many who have been with us from the beginning are still here. Susan and I split up but remain good friends. I have my own nice little house which I'm currently sharing with 5 adult cats and 4 kittens; number subject to change without notice.

There have been ups and downs and mistakes made but I like to think that we're still doing a good job of rescuing and re-homing animals and helping others to do the same.

When you think of cats, you think of fur and sometimes lots of it. But they do come in the other extreme - hairless cats. Here we look at the main hairless cat breeds. best dry food for cats 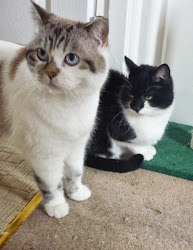